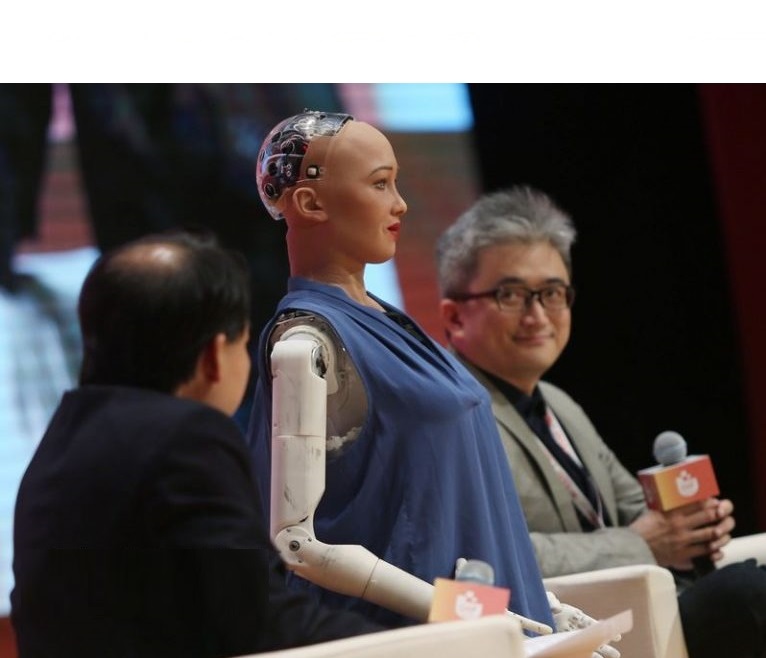 Perched on a pedestal and being carried onto the center stage, Sophia, who was granted citizenship by Saudi Arabia in 2016, began by greeting the audience in Chinese and showing off her ability to make various expressions, which instantly prompted dozens of phone cameras raised from the audience seats, aiming to capture every little movement of the Hanson Robotics’ most advanced robot.

Even Jan Hung-tze (詹宏志), chairperson of the APEC Business Advisory Council (ABAC) Digital Innovation Working Group, which hosts the DIF Taipei with its APEC partner from Papua New Guinea, was drawn to Sophia, describing her participation as “a metaphor of the brave new world we are entering.”

“Asia Pacific will be the fastest growing region in the world,” remarked Jan at the opening ceremony. “Taipei can harness significant potentials in digital innovation.”

“Compared to other markets in Southeast Asia, Taipei owns a more mature market,” said Jan, who is also the founder of PCHome, one of the most popular online shopping websites in Taiwan. “We would like to highlight Taipei, offer international insights to local companies, and unleash opportunities in digital innovation,”

Following Jan’ remarks, Ivan Pomale, chair of 2018 APEC Senior Officials, revealed that the forum had invited more than 30 influential tech leaders from around the world to explore innovative developments and future lives in a digital economy.

In addition to global entrepreneurs and corporate representatives, the six panel discussions will be moderated by journalists from such well-known media outlets as the News York Times, CNN, and BBC to provide their professional insights and speculations on the future.