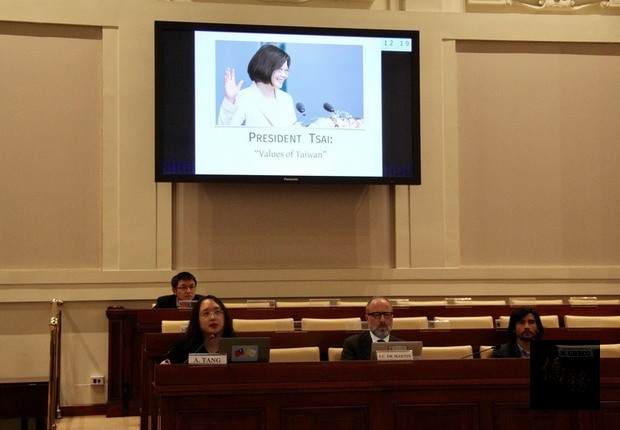 During the meeting that was organized by the Pontifical Academy of Sciences of the Holy See, Tang said the pace of Taiwan’s democratic development has been boosted tremendously by technology.

For example, Tang said, her office is running a vTaiwan platform, which allowed Taiwanese transportation regulators to hold discussions with Uber drivers to resolve recent disputes that arose from issues pertaining to the ride-sharing economy.

In addition, the Social Innovation Lab has been also doing a good job of solving a wide range of problems in enterprises and social groups, Tang said, referring to a service launched recently by the Small and Medium Enterprise Administration in the Ministry of Economic Affairs and the government-sponsored Institute for Information Industry.

In addition, private businesses and social groups are using the Social Innovation Lab to hold video conferences with government officials, she said, responding to concerns raised by some experts at the conference about the impact of technology on society and democracy.

Some of the other attendees said tech giants such as Google and Facebook are becoming increasingly powerful and are subject to scant scrutiny.

The conference was attended by representatives of more than 10 countries, including the United States, Germany, Italy, Israel and Brazil, and focused on the issue of ethics in developing artificial intelligence

Tang said that after her address, Bishop Marcelo Sanchez Sorondo, head of the Pontifical Academy of Sciences, commended her and invited her to attend future meetings of the academy.

During her visit to the Vactican, Tang also got a firsthand look at the first Vatican Hackathon, which was being held March 8-11 with the aim of harnessing the technological skills and creativity of 120 students from more than 50 universities around the world to tackle issues identified as priorities by Pope Francis.